Le Gros Ventre can carry an armament of 20 9pd cannons, making her the most heavily armed trader in game at this moment.

Le Gros Ventre is currently the fastest and most heavily armed trader in game, her 20 guns and her large cargo hold means that she is extremely good at hunting AI Traders, and decently good at hunting player traders without having to return to port immediately. Her 20 guns mean she is also decent in self-defense.

Here is her Sailing Profile. Le Gros Ventre is a pleasant surprise to sail; her low top speed is somewhat mitigated by a broad range of comfortable sailing points. She will perform well at essentially any point from a beam reach or with the wind anywhere abaft the beam. This means that your best chance of escape, should you be intercepted while carrying cargo, is to sail fully running, or on a beam reach, or even a little upwind, as she will perform relatively better on these points than your likely aggressors. Whether or not the relative increase in speed is enough to make up for her low maximum speed will depend on the outfitting of your and your opponent's ship.

Gros Ventre type Gabares(as they were called) were build for ocean operations supplying the colonies. They were built between 1760 and 1770 with average capacity of 400 tons, they had a single deck with high length and breadth ratio, their armament usually consited of 4pd or 8pd guns. They were slower than warships however they were faster than most merchant vessels. Their travels to the west or east indieas lasted between four months and four years. Their high Length/Breadth ratio coupled with the heavy cargo they carried created a lot of hogging and fatigued the framing.

The Gros Ventre was designed by Jean-Josepth Ginoux, Le Gros Ventre was the archetype of the 1760-1770 gabares. She had a length of 36 meters, breadth of 8 meters and a depth in hold of 5.3 meters. She was built in Bayonne by Leon Michel Guignace(the same guy that built La Belle Poule), Le Gros Ventre launched in 1766.

in 1771 she departed from Rochefort for a passanger transport to the isle de frans(now known as mauritius island in the indian ocean). Kerguelen Requisitioned her a few days after arriving for his expiditon to the austral continend, she sailed to the kerguelen islands(she was one of the ships that discovered the islands), australia and indonesia, after 8 months at sea Le Gros Ventre returned to Isle De Frans. She was used as a beef carrier between Madagascar and Isle De Frans before being transformed into a dump hulk in 1777.

You can get the crafting Recipe of Le Gros Ventre through crafting either Renommees or Belle Poules. 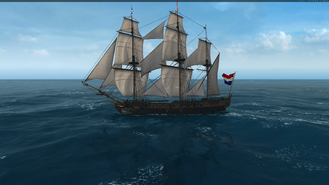 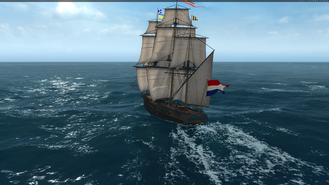 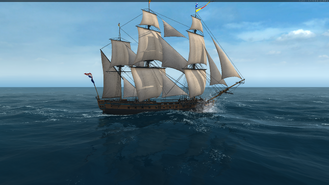 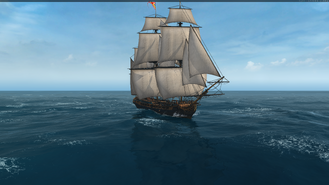 Add a photo to this gallery
Retrieved from "https://navalaction.fandom.com/wiki/Le_Gros_Ventre?oldid=3075"
Community content is available under CC-BY-SA unless otherwise noted.