The Victory is a 106 guns first rate ship-of-the-line in Naval Action. Famous for her role as Lord Nelson's flagship during the 'Battle of Trafalgar.'

The Victory being rather small for a first rate has almost excellent sailing characteristics compared to the Santisima Trinidad. However, the Victory is a decent amount slower.

In December 1758, the commissioner of Chatham Dockyard was instructed to prepare a dry dock for the construction of a new first-rate ship.This was an unusual occurrence at the time, as the Royal Navy preferred smaller and more manoeuvrable ships, and it was unusual for more than two to be in commission simultaneously; during the whole of the 18th century, only ten were constructed. Then Prime Minister Pitt the Elder placed the order for Victory on 13 December 1758, along with 11 other ships.

The outline plans were based on HMS Royal George which had been launched at Woolwich Dockyard in 1756, and the naval architect chosen to design the ship was Sir Thomas Slade who, at the time, was the appointed Surveyor of the Navy. She was designed to carry at least 100 guns and was established with that number of guns; in practice, her armament varied from 104 to 106 guns and carronades. In January 1808, the Victory was reduced to a 98-gun second rate, but was reclassed as a 104-gun first rate in February 1817.

The keel was laid on 23 July 1759 in the Old Single Dock (since renamed No. 2 Dock and now Victory Dock), and the name was finally chosen in October 1760. In 1759, the Seven Years' War was going well for Britain; land victories had been won at Quebec and Minden and naval battles had been won at Lagos and Quiberon Bay. It was the Annus Mirabilis, or Year of Miracles (or Wonders), and the ship's name may have been chosen to commemorate the victories or it may have been chosen simply because out of the seven names shortlisted, Victory was the only one not in use. There were some doubts whether this was a suitable name since the previous first-rate Victory had been lost with all on board in 1744.

Once the frame had been built, it was normal to cover the ship up and leave it for several months to season but the end of the Seven Years' War meant that she remained in this condition for nearly three years, which helped her subsequent longevity. Work restarted in autumn 1763 and she was finally launched on 7 May 1765, having cost £63,176 and 3 shillings, the equivalent of £7.79 million today. Around 6000 trees were used in her construction, of which 90% were oak and the remainder elm, pine and fir, together with a small quantity of Lignum Vitae.

The first battle of Ushant (1778) by Theodore Gudin. Admiral Keppel was later court martialed for allowing the French fleet to escape but was acquitted.

Keppel put to sea from Spithead on 9 July 1778 with a force of around twenty-nine ships of the line and, on 23 July, sighted a French fleet of roughly equal force 100 miles (160 km) west ofUshant. The French admiral, Louis Guillouet, comte d'Orvilliers, who had orders to avoid battle, was cut off from Brest, but retained the weather gage. Maneuvering was made difficult by changing winds and driving rain, but eventually a battle became inevitable, with the British more or less in column and the French in some confusion. However, the French managed to pass along the British line with their most advanced ships. At about a quarter to twelve, Victory opened fire on the Bretagne of 110 guns, which was being followed by the Ville de Paris of 90 guns. The British van escaped with little loss, but Sir Hugh Palliser's rear division suffered considerably. Keppel made the signal to follow the French, but Palliser did not conform and the action was not resumed. Keppel was court martialled and cleared and Palliser criticised by an inquiry before the affair turned into a political argument.

In March 1780, Victory's hull was sheathed with 3,923 sheets of copper below the waterline to protect it against shipworm. On 2 December 1781, the ship, now commanded by Captain Henry Cromwell and bearing the flag of Rear Admiral Richard Kempenfelt, sailed with eleven other ships of the line, a 50-gun fourth-rate, and five frigates, to intercept a French convoy that had sailed from Brest on 10 December. Not knowing that the convoy was protected by twenty-one ships of the line under the command of Luc Urbain de Bouexic, comte de Guichen, Kempenfelt ordered a chase when they were sighted on 12 December and began the battle. When he noted the French superiority, he contented himself with capturing fifteen sail of the convoy. The French were dispersed in a gale and forced to return home.

In October 1782, Victory under Admiral Richard Howe was the fleet flagship of a powerful escort flotilla for a convoy of transports which resupplied Gibraltar in the face of a blockade by the French and Spanish navies. No resistance was encountered on entering the straits and the supplies were successfully unloaded. There was a minor engagement at the time of departure, in which Victory did not fire a shot. The British ships were under orders to return home and did so without major incident.

In 1796, Captain Robert Calder (First Captain) and Captain George Grey (Second Captain), commanded Victory under Admiral Sir John Jervis's flag. By the end of 1796, the British position in the Mediterranean had become untenable. Jervis had stationed his fleet off Cape St Vincent to prevent the Spanish sailing north, whilst Horatio Nelson was to oversee the evacuation of Elba. Once the evacuation had been accomplished, Nelson, in HMS Minerve, sailed for Gibraltar. On learning that the Spanish fleet had passed by some days previous, Nelson left to rendezvous with Jervis on 11 February. The Spanish fleet, which had been blown off course by easterly gales, was that night working its way to Cadiz. The darkness and a dense fog meant Nelson was able to pass through the enemy fleet without being spotted and join Jervis on 13 February. Jervis, whose fleet had been reinforced on 5 February by five ships from Britain under Rear-Admiral William Parker, now had 15 ships of the line. The following morning, having drawn up his fleet into two columns, Jervis impressed upon the officers on Victory's quarterdeck how, "A victory to England is very essential at the moment". Jervis was not aware of the size of the fleet he was facing, but at around 0630 hrs, received word that five Spanish battleships were to the south-east. By 0900 hrs. the first enemy ships were visible from Victory's masthead, and at 1100 hrs, Jervis gave the order to form line of battle. As the Spanish ships became visible to him, Calder reported the numbers to Jervis, but when he reached 27, Jervis replied, "Enough Sir. No more of that. The die is cast and if there are 50 sail, I will go through them". The Spanish were caught by surprise, sailing in two divisions with a gap that Jervis aimed to exploit. The ship's log records how Victory halted the Spanish division, raking ships both ahead and astern, while Jervis' private memoirs recall how the Victory's broadside so terrified the Principe de Asturias that she "..squared her yards, ran clear out of the battle and did not return". Jervis, realising that the main bulk of the enemy fleet could now cross astern and reunite, ordered his ships to change course, but Sir Charles Thompson, leading the rear division, failed to comply. The following ships were now in a quandary over whether to obey the Admiral's signal or follow their divisional commander. Nelson, who had transferred to HMS Captain, was the first to break off and attack the main fleet as Jervis had wanted and other ships soon followed his example. The British fleet not only achieved its main objective, that of preventing the Spanish from joining their French and Dutch allies in the channel, but also captured four ships. The dead and wounded from these four ships alone amounted to 261 and 342 respectively; more than the total number of British casualties of 73 dead and 327 wounded. There was one fatality aboard Victory; a cannonball narrowly missed Jervis and decapitated a nearby sailor.

After learning he was to be removed from command, Villeneuve put to sea on the morning of 19 October and when the last ship had left port, around noon the following day, he set sail for the Mediterranean.The British frigates, which had been sent to keep track of the enemy fleet throughout the night, were spotted at around 1900 hrs and the order was given to form line of battle. On the morning of 21 October, the main British fleet, which was out of sight and sailing parallel some 10 miles away, turned to intercept. Nelson had already made his plans: to break the enemy line some two or three ships ahead of their commander-in-chief in the centre and achieve victory before the van could come to their aid. At 0600 hrs, Nelson ordered his fleet into two columns. Fitful winds made it a slow business, and for more than six hours, the two columns of British ships slowly approached the French line before Royal Sovereign, leading the lee column, was able to open fire on Fougueux. Around 30 minutes later, Victory broke the line between Bucentaure and Redoutable firing a treble shotted broadside into the stern of the former from a range of a few yards. At a quarter past one, Nelson was shot, the fatal musket ball entering his left shoulder and lodging in his spine. He died at half past four. Such killing had taken place on Victory's quarter deck that Redoutable attempted to board her, but they were thwarted by the arrival of Eliab Harveyin the 98-gun HMS Temeraire, whose broadside devastated the French ship. Nelson's last order was for the fleet to anchor, but this was countermanded by Vice Admiral Collingwood. Victory suffered 57 killed and 102 wounded. 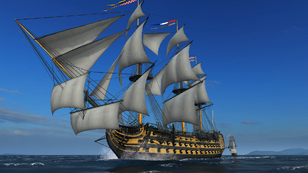 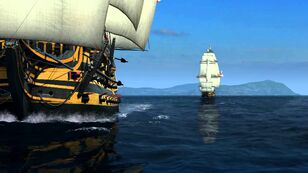 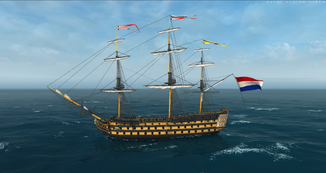 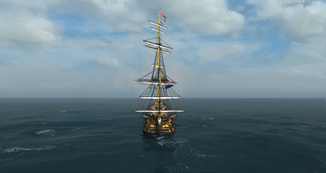 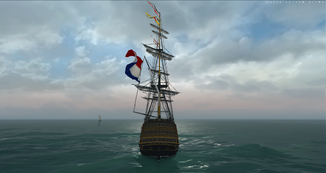